When you’re preparing for a climb, it’s often easy to focus most on the ascent. However, it’s important to remember that getting up is – quite literally – only half the task. After all, what goes up must come down, so you need to be able to make an informed decision as to the best way to descend.

Your options might include simply finding a trail and walking back down, but that’s no fun! You could try rappelling instead. But what is rappelling? This article will go into depth on that question, as well as examining its practicality, potential dangers, and ways to make the pursuit as safe and secure as possible.

So, what is rappelling? In a nutshell, rappelling is the act of sliding down a rope in a controlled manner to descend a steep surface such as a mountain or cliff face. This usually involves threading the rope through a belay device that is attached to the harness.

What Is Rappelling Climbing?

It’s likely a familiar story: you’ve just spent several exhilarating hours climbing. It’s been tiring and stressful, and not without a few wobbles along the way, but all of this pales into insignificance by an overwhelming sense of achievement.

You’re delighted with your efforts and could happily call it a day now, satisfied with your accomplishment. There’s one rather significant problem, though: you still have to get back down. 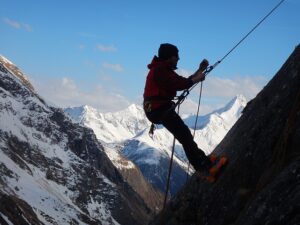 This is where rappelling comes in. Rappelling climbing is the part of the climb where you need to descend through a technique that involves lowering your body down a climbing rope. It sounds simple because it is, in some ways, but it can be hazardous too, so knowing how to rappel correctly is as important as learning to climb in the first place.

Rappelling is one of the best options to descend multi-pitch routes. It offers a quick way to descend and is simple enough to set up. However, it’s essential both your equipment and the way you have secured it is flawless, because your safety – and quite possibly your life – depends almost solely on the reliability of the ropes and anchors you’ll be using.

What’s The Difference Between Abseiling And Rappelling?

Confused as to the difference between abseiling and rappelling? Don’t be. The short answer is that the two terms mean the same thing. Indeed, in some countries, such as Australia, “abseiling” and “rappelling” are often used interchangeably.

In the USA and Canada, you’ll almost always find “rappelling” is the preferred term, while climbers from the UK and mainland Europe are more likely to refer to the practice as “abseiling”.

What Equipment Do You Need?

There are certain things you’ll need to be able to rappel successfully:

What Are The Types Of Rappelling?

There are three main types of rappelling:

From a physical point of view, rappelling doesn’t put your body under quite as much strain as you might have assumed,

Nevertheless, you will need some strength in your core to stay in a sitting position (in standard rappelling). However, this should be no more strenuous than if you were leaning slightly back on a bench without a back, and maintaining that position for any length of time. 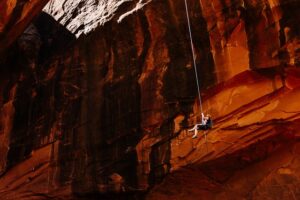 The act of rappelling is also relatively easy once you’ve mastered each required skill. These include learning all the different types of knots you’ll need as you descend, learning the most efficient way to push your legs and body away from the surface, using your brake hand correctly so you can make stops as you descend and maintaining the correct posture as you do so.

For the most part, once you’ve learned the techniques of rappelling, the most difficult thing is to trust in the setup. Because rappelling means you’re relying on just your anchors and the rappelling equipment you have at your disposal for your safety, and often at significant heights, it can be a tricky thing to overcome mentally.

Thankfully, there are techniques you can use to give you extra piece of mind, as well as increase your safety along the way.

Things To Check Before Rappelling

One of the difficulties of rappelling tends to arise when ensuring you’ve set everything up correctly. Often, you’ll be tired after your ascent, so it’s easy to overlook things that are crucial to a successful and safe rappel. Things to look out for include:

Putting The B.R.A.K.E.S. On Your Fear

Following on from my previous point, there is also a handy acronym that can be used before you begin your descent.

Invented by mountain guide Cyril Shokoples in 2005, the acronym B.R.A.K.E.S. is now widely used as a checklist before a rappel, and can be an excellent means of making sure everything is as safe as it can be and calming any nerves you might have before you descend:

Go over each of these carefully, and try to verify each one with your partner before you begin your descent.

Rappelling may look easy, and in many ways it can be. However, it’s the straightforward nature of it that can lull climbers into a false sense of security. Similarly, because lots of emphasis is usually placed on the ascent, it can be common to treat the descent as an afterthought, and that’s where complacency can set in and safety can be compromised.

Rappelling can be an extremely fun and enjoyable part of the process of climbing, but it’s definitely not for the inexperienced or unprepared.

By adopting some of the techniques I’ve outlined in this article, I hope you’ll be able to overcome any doubts or fears you might have about rappelling, and can begin to see it as an overall part of the entire climbing experience, rather than merely a thing that needs to be done after the adrenaline rush of your ascent has begun to subside.