It’s no surprise that no one likes mosquitoes, even the scientist responsible for researching these little pests. They buzz around, suck your blood, and can carry diseases.

You want to avoid mosquitoes as much as possible and you’ve likely taken the steps to do so, such as using candles and sprays as well as having no stagnant water around for them to breed.

One thing you may not be aware of is that color also attracts mosquitoes and the reason why is rather surprising for these simple pests. In this article, you’ll find everything you never knew about colors and mosquitoes, as well as why mosquitoes are attracted to certain colors.

The short answer is darker colors. This include:

Now, I know what you’re thinking. Red is the color of blood, mosquitoes drink blood, so therefore wearing red makes the mosquito think you’re a walking pool of blood. While this is quite comical, the truth is actually more surprising although not as comical.

Why Are Mosquitoes Attracted To Certain Colors?

Mosquitoes, despite being pests, are surprisingly complex creatures. Given the likely thousands if not millions that die on any given day, they would have to be to have survived for millions of years.

Mosquitoes, like many insects, have two types of eyes. Their compound eyes at the side of their head, and then eyes that are photosensitive at the top of their heads called ocelli.

For being so small, the compound eyes of a mosquito are quite advanced with each eye covered in lenses called ommatida. Each lens can detect movement, which gives a mosquito unparalleled vision.

In fact, research has shown that a mosquito can see a potential host from 16 to 32 feet away. Given they have to then hone-in on that host and land, you have to hand it to these little pests for being that evolved. 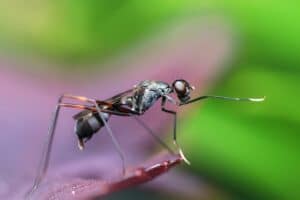 This still doesn’t answer the question of what colors attract mosquitoes, though, or why they’re attracted to darker colors over lighter colors. The reason they’re drawn to darker colors is heat.

Despite their great eyesight, a mosquito can’t tell by sight alone if something or someone alone is worth landing on and attempting to suck their blood.

To do this, they rely on their ocelli, the light-sensitive eyes on their heads, along with their antennae and maxillary palps which I’ll go into detail later. In short, mosquitoes are seeking out something that’s alive.

The best way to tell if something is alive or not when you’re a tiny pest is to see if there is any heat emitting from the source.

Darker colors, such as black, navy blue, brown, and dark reds, are excellent at trapping heat. You know the old expression of “dress heavy in the winter, light in the summer”?

Well, think of the colors you’d wear in those times. Light colors in summer, darker in winter. This is because light colors repel heat, and darker colors absorb it.

So a mosquito will be attracted to anything in a dark color over a light color. As said, rather surprising for an insect that is swatted without a second thought.

No. While mosquitoes are attracted to darker colors, a lighter color isn’t going to repel them. Especially when they’re on the hunt for a meal.

Wearing lighter colors during warmer, and thus more mosquito heavy months, might get mosquitoes to not notice you on their first past. Remember, mosquitoes use not just sight, but heat and chemical scents.

Remember I mentioned their antenna and maxillary palps? This is where those come into play. These can pick up on carbon dioxide release, which means every time you breathe you’re releasing a scent that is attractive to mosquitoes.

The release of carbon dioxide, along with humans being hotter than their surroundings, usually attracts mosquitos. By wearing darker colored clothes, which traps in heat, we’re making ourselves a much bigger and tastier target.

In a sense, trying to hide from mosquitoes is like how a stealth plane hides from radar. We can’t be 100% invisible, but we can reduce our scent enough that they’ll bypass us.

Not only will these colors keep you cooler during hot months, but should also trick a mosquito! At least until you breathe or move, then that mosquito will be right back to annoy you. 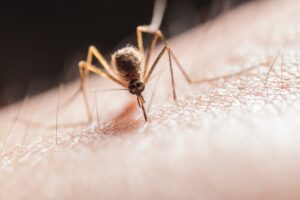 What Is The Best Way To Repel Mosquitoes?

So let’s go over some other ways you can repel mosquitoes, or at the very least make yourself not as appetizing. I won’t mention clothing choice, since most of it was pretty much covered already.

There are other ways to keep mosquitoes away while camping, including misting systems, air curtains, actual curtains, etc but those four examples are what I feel is the best way to keep them away.

And of course, wearing lighter clothing. Mosquitos have spent millions of years evolving into the perfect pest, but once you understand what attracts them, it’s very easy to keep them away!