Bass are one of the most popular freshwater fish among anglers all over the world but particularly among American anglers.

It’s easy to think that bass are bass but, as any experienced angler will tell you, there are crucial differences between smallmouth and largemouth bass.

The differences affect the way the fish look but, more importantly, they also affect the behavioural patterns of these beautiful fish.

In this article we will compare smallmouth vs largemouth bass to give you the complete lowdown on what they look like, how to tell the difference, where to find them and how to catch them.

Smallmouth and largemouth bass look pretty much the same at first glance. They have a similar shape, grow to a similar size and even like the same water.

However, that’s where the similarities end because these are two distinct species and should not be confused. Not if you hope to start catching them at least.

How To Quickly Tell The Difference Between Them

As the name implies, the larger of the two species is the largemouth bass. People have various nicknames for them depending on what part of the country you are in but we’ll stick with the full name here.

They typically grow to about ten pounds although a good specimen can sometimes grow to fourteen or fifteen pounds or even more.

Another way to tell the difference is to study the colour of the fish. Whilst this is not always a reliable indicator as to which species you are looking at, it does give you some idea of which it is most likely to be.

Traditionally, anglers refer to smallmouth bass as brown bass and largemouth bass as green bass. If only things were that easy! Unfortunately, as mentioned above, colour is not necessarily the most reliable way to distinguish between the two species.

Whilst it is true that their colours differ to some degree, their colour naturally varies with age, diet and location as well as a host of other environmental factors.

There are, however, three key ways you can identify which species you are handling:

The first and most obvious difference to note is that largemouth bass have larger mouths than their smallmouth cousins.

You can clearly see that the upper jaw extends way beyond the eye socket, whereas with the smallmouth bass their jawlines usually fall just in line with the eye socket.

If you’re still undecided which species you have just landed, look at their markings. Whilst their colours are not a reliable way to distinguish the two species, their markings are much more so.

Very often, another little giveaway as to which species you’re reeling in is the way that the fish is playing on the line.

Smallmouth bass tend to be a lot more energetic than the largemouth bass. Their tough little cookies and they will fight hard and repeatedly jump to try and disgorge themselves of the hook.

Largemouth bass might jump once or twice but then they’ll try to beat you with brute strength under the water or by taking you into some murky cover where you are likely to get tangled.

Just by judging that alone, you can get a reasonably good idea of which of the species you have on the line.

Where To Find Smallmouth and Largemouth Bass

Being able to tell the species apart is all well and good but you need to catch them first and to do that you need to know where to find them.

Interestingly enough, smallmouth bass prefer colder waters where largemouth bass prefer warmer waters. It’s also worth bearing in mind that, even though these two species are closely related and can in fact live together, they prefer not to.

You can use this sort of knowledge to your advantage if you see other anglers catching a particular species in one part of the lake perhaps.

Simply set up somewhere else where you will possibly find the alternative species of bass.

Where to Find Them

Largemouth bass are actually native to eastern and central states but, due to the seemingly ever-increasing popularity of bass fishing, they can now be found in lakes all over the country.

Perhaps one of the reasons for their enduring popularity is that they make for a good challenge. Bass are among the smartest and toughest freshwater fish that you will ever likely catch.

Largemouth bass are quite reclusive. They like lots of cover. They’ll try hiding in between rocks and crannies, thick grass and reeds, weed beds and anywhere else they think that they’re safely out of sight stalking their next meal.

Whilst that may sound problematic, it actually makes the task of catching them slightly easier in some ways. Instead of having to look for where they might be feeding you simply look for places they are likely to seek cover.

If you’re fishing for largemouth in rivers, it is worth noting that they are relatively idle fish and so don’t like strong currents.

Hence, be on the lookout for any thick cover near a fast current that could be a potential resting spot for them.

Smallmouth bass, unsurprisingly, also don’t mind a bit of cover but for very different reasons. They don’t try entering the cover, instead they hunt small bait fish around the perimeter and often chase them out into open water.

In other words, if you are hunting smallmouth bass specifically then it’s probably best to either fish around the edges of covered areas or try to spot them in clearer waters.

If you’re fishing a river, also bear in mind that, unlike their bigger cousins, the feisty smallmouth bass prefer swift moving currents. They really are gutsy little fish.

Bass reach sexual maturity at about a year old and begin spawning during spring time as the weather starts to warm up a bit.

Spawning lasts through the springtime and even longer in some of the southern states due to the warmer temperatures.

After the females have laid the eggs, the males then spend their time guarding the nests which are typically small mounds of mud, gravel or sand on the bottom of the lakebed.

What this means is that following the spring, April, May and June can be really great months for landing some nice bass.

The summer is great fishing all round, of course. For anglers who carry on fishing into the winter months, there probably aren’t going to be a lot of smallmouth bass around.

They go off and hibernate so it is better to then start targeting the largemouth instead.

Why Largemouth Bass Are Not Universally Loved

That’s because they grow into reasonably big fish, weighing ten pounds or more in adulthood, and they are pure predators.

If a lake doesn’t have a lot of cover for smaller species, the largemouth will quickly annihilate their population, hence the species is seen as very invasive.

In contrast, smallmouth bass, though still predators, don’t decimate quite as much of the other fish stock due to long periods of hibernation during the colder months and seasonal migration.

The Best Time To Fish For Bass

There is no best time of year as such to fish for either smallmouth or largemouth bass. It all depends on where you are fishing.

It is important to understand that every location has its own environment that will determine how well you do. That includes things like climate, vegetation, water conditions and so on.

That said, there are some seasonal factors that you can use to your advantage:

Because they are lazy predators largemouth bass love the still summer waters, the ideal hunting conditions for small bait fish.

You’ll find them milling anywhere that there is a good amount of cover. Just keep in mind that the slightest little bit of wind and they’ll probably head into that cover until the waters calm down again.

Smallmouth bass prefer to hunt in clearwater but when summer kicks in they tend to head for deep water which makes them slightly more difficult to track down.

They come back to the shallows when things cool down a bit in the fall. It’s not to say you can’t catch them in the summer, of course, but you will probably have more success in the cooler months when they are more in the shallows. 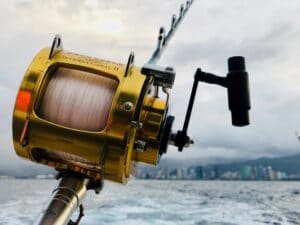 What Gear You Need

Now, with all that we’ve just been talking about with largemouth bass liking cover and such like, it should be fairly obvious that you are going to need more durable gear to land them.

For example, you might want to consider using a bait-casting rod rather than a spinning rod because it is stronger and more durable, especially when you’re up against underwater obstacles like reeds and rocks.

Make no mistake, because the smallmouth are a bit smaller doesn’t mean they are weak. They will also give you a good fight so you can use a bait-casting rod for them too of course.

Being predators bass are highly intelligent. If you are lucky enough to hook one, there is a high chance that given the opportunity they will deliberately drag you into obstacles in an attempt to get off the hook. Therefore, you will also require a nice strong line.

In terms of baits and lures, it’s a question of personal preferences really. Whatever works for you. Try out different things each trip and just see how things go, you’ll eventually find a set-up that works for you.

How To Bait Smallmouth and Largemouth Bass

Knowing what bass like to feed on is an essential component to your success in landing them. Luckily, neither smallmouth nor largemouth bass are particularly fussy.

Both species start out feeding on algae before progressing onto a carnivorous diet of other small fish and insects. Their diets then include things like shrimp, salamanders and shad.

The largemouth bass will even prey on larger fish because of its superior size and strength over the smallmouth bass.

Everybody has their own little method, their own favourite bait, their own secret technique but basically, whatever works for you is just fine.

You can use small worms, spinnerbaits, plastic jerk baits, whatever you think they’ll go for. That said, there are a couple of things you can do to improve your chances of catching:

If you are fishing for largemouth bass, try to cast into the grasses where they are likely to be hiding out. You want to use a lure that’s nice and visible but not likely to get snagged.

Plastic jerk baits are quite good for getting in there but you’re still likely to get snagged if you’re not careful so be patient. If you’re fishing for smallmouth bass, they’ll go for near enough anything you bait them with.

Which Should You Go For?

The chances are, even if you’re targeting one rather than the other, you’ll be happy to hook either. Largemouth are nice, big fish and can be a good challenge to try and land but then so can smallmouth.

Ultimately, it’s whatever makes you happy but at least now you know how to tell the difference between the two and where, when and how to fish for them!