It seems to be a human passion to climb things.

Rock climbing, however, is a rather generalized term because there are different fields of climbing, such as bouldering.

So how does bouldering differ from rock climbing, and what is bouldering to begin with? Read below as I’ll cover all aspects of this thrilling sport!

Let’s start by answering the main question, just what is bouldering? As the name implies, it likely has to do with boulders and if you think it’s a sport about climbing boulders then you’re correct!

Bouldering is a sport where you climb boulders or very large rocks. Not any large rock, but one between six to twenty feet high. Of course, the higher the boulder the easier it is to hurt yourself.

So bouldering is all about climbing boulders, which means it’s like rock climbing, right? Well, not quite. 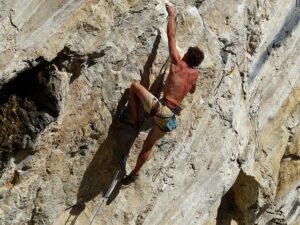 What Is Rock Climbing?

Usually, but not always, rock climbing involves a rope for protection, and this is called traditional climbing or lead climbing.

Rock Climbing vs Bouldering – How They Differ?

There are two big differences between bouldering and rock climbing.

So, for traditional rock climbing, you need a rope, climbing shoes, helmet, harness, quickdraws, and some security devices to catch you. More gear can be added, and at minimum, you’ll need the harness, rope, and quickdraw.

As for bouldering, the equipment list is climbing shoes and a crash pad. That’s it. Sometimes a climber might use a chalk bag or brush to keep their grip strength, but that’s it.

Bouldering is a form of rock climbing that’s done with minimal equipment and relies on the dexterity and stamina of the climber.

The next major difference between rock climbing and bouldering is the height that the climber is expecting. For bouldering, the height is between 6 to 20 feet and it’s not unreasonable to be able to climb a smaller boulder in only 5 moves.

For rock climbing, the average move count is around 50 and the rock face can be tens to hundreds to even thousands of feet tall! 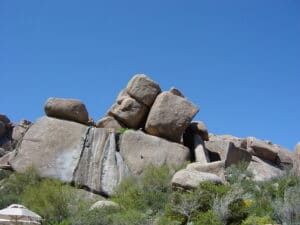 Why Choose Bouldering Over Rock Climbing?

If you’re a budding climbing enthusiast and want to know if bouldering is better than rock climbing, the answer is no. Neither one is better than the other, as you’ll soon discover.

You shouldn’t pick one climbing sport over another in the belief one is superior, but instead select one that’s challenge matches what you want, and which best suits your stamina and dexterity.

That being said, why choose bouldering over rock climbing? The goal of bouldering isn’t to just climb a boulder. Instead, it’s climbing the boulder in as few moves as possible.

Bouldering is also quite intensive on the body so it builds up your dexterity and stamina.

As for equipment, at most climbing shoes and a shock pad is needed. This can make bouldering a much cheaper option over regular rock climbing, which does require more equipment.

A shock pad, while not necessarily needed, is usually recommended for protection when jumping down or possibly falling down a boulder.

This is where the stamina and dexterity comes in, as bouldering is similar to free climbing. That is, climbing without a rope. Unlike true free climbing, there isn’t much risk of serious injury or death due to a fall thanks to the smaller height of the boulder.

Finally, if you’re one who prefers to climb alone then bouldering is right for you!

Why Choose Rock Climbing Over Bouldering?

Rock climbing, while not as intense as bouldering, is much more versatile. After all, you’re not just climbing boulders. You can climb mountain faces!

For the sake of argument, let’s look at the lead/classic rock climbing, given we established rock climbing is a rather generalized term that encompasses many different sports that all involve climbing rocks.

Rock climbing, as mentioned, requires more moves than bouldering and is a much slower-paced climb. While there are speed climbers and sports climbers, for the classic/lead it’s all about the journey rather than the destination. You need to think about each move carefully and plan each step, least you lose your grip and go plummeting.

This leads to the next point; safety. While you might climb very high rock faces, you have a rope and harness attached to you at all times, as well as a quickdraws and security clamps.

You might hurt yourself, but the chance of serious injury is slim. This isn’t to say it’s impossible, but the risks aren’t as bad as a free climb.

This, of course, leads to the equipment. Classic/lead requires rope, harnesses, a helmet, special cables and hooks, and of course proper clothing such as shoes and climbing gear.

Rock climbing this way is rather expensive. but if you’re concerned about safety then it’s worth the price to remain safe.

One last difference between rock climbing and bouldering is location. Rock climbers need to have either special permission to climb some rock faces, or these rock faces are on their land or in public places that allow climbing.

Not every rock face, mountain, or hill is open to the public. Bouldering, meanwhile, is climbing boulders and for the most part, boulders tend to be in public lands or at least no one really minds anyone climbing a boulder.

Climbing can be a solo or cooperative sport, unlike bouldering which tends to only be solo. It’s up to the individual climber if they want to climb alone or with others, however.

What Gear Do I Need For Bouldering vs Rock Climbing?

The only things you really need are climbing shoes. But there are some special items that you would use for bouldering, which include a chalk and crash pad.

The crash pad is rather self-explanatory, as if you fall the pad will catch you. Seeing as you’re not falling from too far up, you don’t have to worry about severe injury.

The chalk is for powdering your hands, which some rock climbers do take and use. Powdering your hands and drying them provides a much more stable grip, and when you’re climbing without a rope this grip is very important.

Beyond that, you need much less for bouldering than rock climbing which makes it a somewhat more attractive sport.

There is another type of rock climbing called try tooling, where you use tools such as axes and crampons to climb rock faces.

Dry tooling is originally used by ice climbers who trained in off-seasons, but it’s quickly gaining popularity among the community.

Which Is More Dangerous?

If you’re after thrills and danger, then rock climbing is arguably more dangerous than bouldering. Really, the main danger comes from the height.

Even a small fall of a few feet can cause injury or even death depending on how you land. A fall from a much higher place, say thousands of feet, is going to lead to death.

Bouldering never goes higher than twenty feet, which while that can be lethal it’s more likely going to lead to injury instead.

Rock climbing, on the other hand, tends to have preventive measures to ensure the climber’s safety. Outside of the rope harness, there are safety clamps and quickdraws to provide the climber the ability to drop down if they’re stuck. This helps when in the face of rock faces that are hundreds if not thousands of feet tall.

Either sport can be quite dangerous if you don’t know what you’re doing. But, with a little practice on smaller boulders and rock faces, a novice climber will easily grow into the sport and can take on much larger challenges.

And there you have the differences between bouldering and rock climbing. As stated at the start of this article, neither one is superior or worse than the other, no matter what some climbers say.

Each one is different and challenges the climber in a different way. In turn, this means both require skill sets that do tend to overlap.

It’s not hard to use what you learned climbing a rock face to climbing a boulder, and vise-versa. Now, if you want to know what I suggest is best for beginners it would be rock climbing.

The learning curve is very fair and thanks again to the overlapping skills it’s not hard to take what you learned with rock climbing to start working on climbing boulders!