Rock climbing is a difficult skill to master, but one that’s very rewarding. Nothing beats being able to scale a sheer cliff face or a boulder.

It’s also a great sport for recreation and can be experienced with others in social climbs! This being said, how many calories does rock climbing burn?

Rock climbing, after all, requires you to use all parts of your body. Would this make it a great skill for workouts? Or is it one where you won’t see much change at all?

How Many Calories Does Rock Climbing Burn? Everyone seems to have different answers on how many calories are burned, but the general consensus is that you will burn on average between 500 to 700 calories an hour while rock climbing. Obviously, the more intensive you climb, the more calories you’ll burn.

This also doesn’t take into account any warm-ups performed before or after climbing, just the climbing itself. If you want a per-minute basis, normally eight to ten calories are burned on average when rock climbing.

How To Calculate Calories Burned By Rock Climbing

So, how do you figure out how many calories you’re burning per-hour? Well, the most common formula is:

In theory, this means the longer you work out the more calories you burn and you can manage thousands of calories burned in just a few hours!

But, this is just in theory. The rate at which you climb, and how intensively you climb, all factor into this.

Suppose, for example, you do an hour-climb but break it into two thirty-minute sessions. You likely aren’t putting in the exact same amount of energy into each session and even the same energy throughout the same session.

This is why the 500 to 700 number is tricky, because some people can burn around 200 to 300 calories an hour, and others well over a thousand.

That being said, 500 to 700 calories burned an hour is the agreed burn. The best way to get your results is time yourself actually climbing and not taking into account rests.

This will give you a much better estimate of how many hours you spend climbing. Because if you’re just hanging on the rock wall, you’re not burning many calories.

So, while the common formula is X Hours x Y Calories, you should also take into account the total time spent climbing and your intensity to work in how much you think you burn in a minute.

Multiply that by sixty for your Y Calories and then the total time for X Hours. This may sound more complicated then it needs to be, but it’s not once you write down everything in notes.

So take some mental notes while climbing, and make sure to write them down as soon as you take a rest. This will keep track of your speed, intensity, time, etc and you’ll eventually have it all memorized! 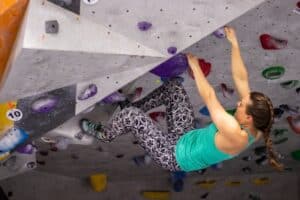 Is Rock Climbing A Good Workout?

Unless you’re climbing the exact same rock wall and never charging which overhangs to grab, very rarely if ever will rock climbing be repetitive.

Plus, testing has shown that your heart will get quite a good workout as well. This means that rock climbing isn’t good for those with heart conditions.

Can You Lose Weight From Rock Climbing?

Yes. Keep in mind that really any sport or exercise will help you lose weight. As long as you’re in motion and exerting yourself, your body will burn up calories to keep you going.

Rock climbing, just like dry tooling, requires you to use all parts of your body, which does work pretty well at keeping body fat off. On the flip-side, because rock climbing is very intensive, you may find yourself eating more to replace lost calories.

So yes, rock climbing can help you lose weight and keep that weight off. Just be sure you’re eating enough food so your body has fuel to burn, as it’s very easy to get exhausted from climbing too much. 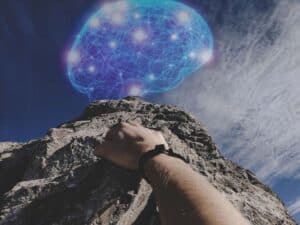 Can You Become Smarter By Rock Climbing?

Well, no. But rock climbing, according to one study, can help improve your memory. And not just your muscle memory, but brain memory.

Rock climbing isn’t all about muscle power, as you need to properly keep yourself balanced while climbing. This promotes the growth and development of your cognitive skills.

This drastically helps with memory, and can also work to assist with depression. Understand that when it comes to memory, you aren’t going to be “smarter” by rock climbing.

You will, however, have a sharper memory if you continue to rock climb. Since rock climbing isn’t by any means repetitive, your brain will be put to the test to keep you balanced as you climb. Such drastic changes lead to improved cognitive skills.

The study did not have anything to say on being able to learn faster or read quicker after rock climbing, but it certainly can’t hurt for you to try that out after your next climb.

Rock climbing is an intensive skill, but as we have discovered through the course of this article, quite an awarding skill as well. You can keep in shape, and keep your mind sharp!

Best of all, practically anyone can rock climb and it can be done alone or with a group of friends. There are even indoor venues that allow you to rock climb if you happen to not have a mountain or hill next to your house.

By no means is rock climbing an easy skill to master, but with enough practice and patience, you’ll be able to tackle longer and harder climbs.