Picture the scene: you’ve had a perfect day’s angling. The weather has been ideal, the spot you picked has left you so relaxed that if it wasn’t for your waders, you wonder if you might have ended up horizontal. All your troubles have been left far behind.

And then – what’s this? It’s a bite! A pretty big one! You begin to reel in your catch, and, after a bit of to-ing and fro-ing, he’s come to the surface, and you pick him up – a magnificent rainbow trout. Er, or is it a steelhead?

Actually, when it comes to rainbow trout vs steelhead, what’s the difference anyway? Let’s take an in-depth look at that question, considering what sets them apart from each other, how you can tell the difference, and whether they taste, or even look, that much alike.

So what’s the difference between rainbow trout and steelhead? The two fish are the same species, known as Oncorhynchus mykiss. However, where they live during their adulthoods determines which one is a rainbow trout and which is a steelhead. The former stays in the river as an adult, while the latter is anadromous. In other words, it moves out to sea.

Why Do They Have Different Habitats?

At the beginning of its life, an Oncorhynchus mykiss will live in the river, freshwater lake, or creek in which it was born.

However, somewhere between the ages of one and three, something happens that can lead to certain ones staying in that habitat throughout their lives and others to seek waters new out to sea.

The reasons for this have left scientists puzzled, but the most plausible explanation is that environmental and genetic factors are at its route. 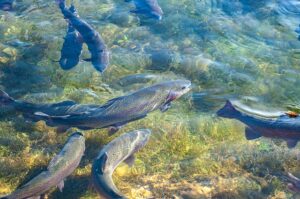 More specifically, it is thought those with a higher metabolic rate are more likely to head for seawater. Also, if the freshwater area has particularly abundant food supplies, there’s less likely to be as much migration. The freshwater bodies of water with less food will likely “create” more steelhead, then.

Not only that, but when a steelhead is successful in finding seawater (not all of them are because issues such as physical barriers can stand in their way), they will return to the freshwater they were born in to spawn. After that, they will then head out to sea again.

If all that sounds like too much hard work, the rainbow trout appear to agree, as it takes the far more straightforward life route of merely staying put throughout its adulthood, sticking to what it knows in the original freshwater habitat of its birth.

How Does Steelhead Thrive In The Sea?

Not all steelhead are alike. Indeed, when they reach saltwater, some venture further out into the open ocean, while others stay close to the shore. Perhaps not surprisingly, the ones that make it into the open ocean tend to gain the most weight owing to the greater abundance of prey.

Those that stay close to the shore or in tidal estuaries range between two and six pounds in weight. Typically these will have been in saltwater for a year.

Steelhead that has spent two years in the ocean weighs around 10 pounds. Meanwhile, for the hardcore ocean dwellers, who’ve spent up to five years there, they can weigh anything from 20 to 30 pounds.

Eventually, though, however long the steelhead spends in the ocean, it will ultimately return to freshwater, because even at their most adapted to ocean life, steelhead will never spend more than five years or so in saltwater. 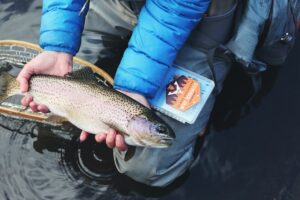 How To Tell A Steelhead From A Rainbow Trout

Several tell-tale signs can mark a rainbow trout apart from a steelhead. Here are some of the most obvious:

How Different Are The Diets Of Rainbow Trout And Steelhead?

One of the reasons steelhead grow so big the further out into the ocean they get is because of the abundance of prey at their disposal. Herring and sardines, in particular, had better watch out when the steelhead is around.

Crustaceans such as crab and shrimp are also consumed by steelhead, contributing to their immense size.

Rainbow trout, on the other hand, tend to eat aquatic insects such as midges and mayflies, as well as aquatic larvae. Meanwhile, they’ll also eat fish, including minnows, gobies, and shiners.

A Question Of Taste

if you’re not throwing the fish back and intend to eat them, it’s handy to know the differences between how rainbow trout and steelhead taste.

Usually, steelhead will have a similar taste to salmon, albeit slightly milder. Meanwhile, rainbow trout will taste delicate with a pronounced nutty flavor. This makes them a good protein source for people who are not keen on overpoweringly “fishy” tastes.

If you want to learn how to fish for trout, check out our full guide here!

So, we’ve determined how rainbow trout and steelhead differ, what they eat, and how they taste. Predictably, though, it’s not quite that simple.

In the 19th century, rainbow trout were introduced to the Great Lakes of North America. The trout that reside there now mimic that curious migration of steelhead without actually leaving the freshwater environment of the lake.

Your definition of whether these fish are rainbow trout or steelhead is likely to depend on the significance you place on steelhead being ocean dwellers.

If you don’t think that’s a necessary part of what makes a steelhead, you’ll be happy to conclude that steelhead resides in the Great Lakes. However, if you think the migration is crucial in defining steelhead, you’re dealing with rainbow trout.

One thing’s for sure though – if what’s in the Great Lakes is rainbow trout, they’re particularly big ones!

Because of this confusion, it might be one of the few times when referring to these Great Lake swimmers by their Latin name might be more straightforward: who fancies fishing for some Oncorhynchus mykiss on the weekend? Hmm, OK, perhaps not.

Hopefully, this article has provided some clarity into the differences between the two types of fish, from their significantly different patterns of behavior on reaching adulthood, as well as their differences in size owing to that behavior, to the more subtle differences in the way they taste and look.

With any luck, next time you’re out for a relaxing day’s angling and you reel in a rainbow trout (or steelhead), you’ll have a better idea of which one you’ve actually caught.

And if all else fails, remember – you can always mark it down to just another successful day catching some of that good old Oncorhynchus mykiss.