It’s crazy to think that when you’re going for a hike or setting up camp – a bear could be smelling and tracking your scent.

This article will talk about how far bears can smell, also the best ways to avoid them while camping in the woods.

How Far Can Bears Smell?

Depending on weather, wind, and if something has a more pungent smell – at the low end of the spectrum, some claim that bears can smell between 1 – 3 miles.

Others say that their minimum range is 10 miles, and the maximum range is between 15 – 20 miles! That is one impressive noise, regardless if it’s 1 mile or 20, and also means that once you’ve walked into a bear’s territory, they can already smell you.

This being said, there is some debate about the sense of smell between brown or black bears. 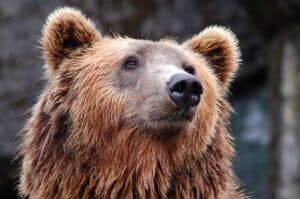 Why Can Bears Smell So Far?

Why exactly do they have such a heightened sense of smell? After all, they can see fine. Their hearing isn’t bad at all. So why rely on smell?

To answer that, you need to take into account that bears tend to be solitary creatures that carve out “territories” for themselves. Their sense of smell allows them to tell,

With a great sense of smell, a bear can utilize its other senses to work with smell.

For example, if they smell something unfamiliar in their territory, they can track that smell and use their hearing and sight to check if this smell is from prey or a possible threat.

For us humans, we present a loud, unfamiliar in both sight and sound target that bears may see as a threat; especially if there are cubs nearby. 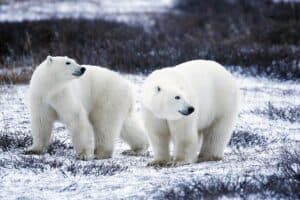 How Far Can Other Types Of Bears Smell?

Most species, including Kodiak, Grizzle, Brown, and Panda Bears can normally smell around 20 or more miles.

Polar Bears have what is so-far documented as the best sense of smell for a bear. They can detect seals, their favorite food source, from up to 40 miles away!

Given that they live in arctic tundras, where sight and hearing can be hampered, they need their sense of smell to find their prey.

Of course, some argue that the range for other bears save for polar bears is much lower such as 1 to 5 miles.

How Do You Avoid A Bear’s Sense Of Smell?

Now that we talked about the sense of smell, how do you avoid a bear while out hiking, climbing, biking, or any other outdoor activity?

Given their powerful sense of smell, they’ll know where you are before you know where they are. Plenty of encounters occur because a bear has picked up your scent and is coming to investigate.

This said, despite their depiction in popular media, bears tend to want to avoid human contact as much as possible.

They’re smart animals, and understand that while humans might have yummy food, it’s generally not worth the risk to attack a human. However, unaccompanied food is completely free game for a bear.

This is one of the reasons why close encounters with bears tend to end violently. Besides the presence of a cub that a bear is protecting, they will also defend any source of food.

Which includes your food. This is why if you’re going camping, outside of hanging your food from a tree, you need to pack your food in non-odor bags.

Most bags, like zip lock bags or just the original packaging the food comes in, will still produce a powerful odor that a bear can pick up on even if you can’t.

Unattended food, like I said, is free game for a bear. After they pick up the smell, find the food, and dig in they’ll recognize this food is quite yummy. And if this just so happens to be at your campsite, and you show up, a bear won’t hesitate to stand its ground to protect its food. 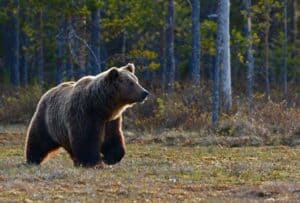 So before going on a camping trip or hiking trip, always store your food in non-odor bags. You can find them in outdoor stores or online and tend to not very expensive when compared to regular bags.

You can even find reusable bags being sold if you don’t want to throw out your special bags after each use. Blocking the smell of your food will cut down on any bears wandering into your camp.

As for yourself, there isn’t much to do that’ll protect you from a bear’s sense of smell. Instead, they will likely not find you interesting.

They might stroll nearby to investigate, but will stay far away from you. In turn, you should give them their distance. Never panic or run, as this might lead the bear to attack you or at least give chase.

By acting calm, giving a bear its space, and keeping your food away from them, including where they can’t smell it, will keep any aggressive encounters to a bare minimum. Pardon my pun.

Despite their frightening appearance and strength, bears tend to be more curious than threatening. They generally won’t attack you unless it feels it absolutely has to. No reason to make it think that.

While a bear can detect you with its smell, this doesn’t mean that you’re in danger. As long as you keep your distance, stay calm, and keep your food hidden you’ll have no issue with bears on your next outing.

Maybe you can even get a picture, as long as you’re keeping your distance!

Check out this article on keeping your food cold while camping, where I go over 10 simple ways for making your food last longer.