If you’ve ever seen climbing gear before, your eyes may have been drawn towards the ice climbing tools.

Those cool spiky boots and sweet looking axes along with all the other gear you’d need for climbing a frozen mountain. But did you know that you don’t need a snowy mountain to use ice climbing tools? You can use them as dry climbing tools!

But what is dry climbing, you might wonder? Well, read on as we delve into the interesting world of dry tooling.

What Is Dry Tooling? Also called dry climbing, it is a type of climbing where you use ice tools despite there not being any presence of ice or snow. The sport started growing in popularity in the 1990s, and by the 2000s there were indoor venues around the world for dry tooling along with thousands of specific dry tooling routes.

While dry tooling has developed into a sport in its own right, it’s also common for ice climbers to practice dry tooling during the off-seasons least their skills don’t get rusty.

This is up to some debate, as dry tooling tends to be more of a gymnastic sport than rock climbing. Rock climbing focuses on scaling sheer, typically vertical cliffs.

Dry tooling, on the other hand, works on vertical cliffs but also on overhangs that can go well over thirty degrees! Another challenge that dry tooling face is not having your hands and feet directly on the rocks.

This might not sound like a big deal, but believe me when I say not being able to grip the rocks can really ruin your mental placement.

The point of dry tooling is to just use your axes and other tools, and this can take some time to learn. It can be quite fun, and be an interesting take on rock climbing. But you do need practice.

So, this is why the difficulty is debated. Some think this type of climbing is much harder than regular rock climbing as you don’t have a proper grip on the rocks. Others think its easier, since you’re being assisted by tools and equipment.

In my honest opinion, I’d say it’s as difficult as rock climbing. The two require two separate skill sets, and different equipment for that matter.

Of course, depending on your experience with either sport, one might be more difficult than the other. So it’ll likely be up to you to decide how challenging this sport is compared to regular rock climbing. 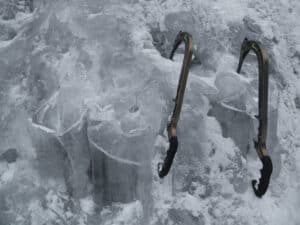 The one important tool that you need is the climbing axe. Due to the sport being nearly thirty years old, specialty axes have been made for dry tooling given that rock is much more thicker than ice.

An ice axe is likely to break or be heavily damaged if used for dry tooling. That’s why an axe for dry tooling will feature a much thicker axe head, and the angle the head is facing will be adjusted.

The grips themselves are also different, taking into account you’re not in a frozen environment and need to be comfortable in a non-gloved hand.

So when buying tools, be sure the axes in question are those that are safe and workable for dry tooling. You’re going to count on them to keep you from falling, after all, so you shouldn’t take any risks. 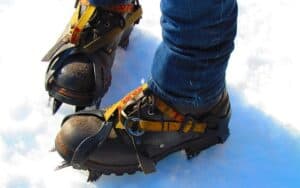 The next common piece of equipment is crampons. Crampons are, essentially, spiky footing that you place on the soles of your boots. In ice climbing environments, the crampons allow you have gained much better traction in the snow and ice. However, for dry tooling, their use is questionable.

Some argue that crampons are vital to the experience of dry tooling. Others say that they just needlessly wear the climber down and aren’t that useful.

This is why many dry tool climbers just wear regular climbing shoes or boots. For me, I only wear crampons if I’m going to be climbing up steep overhangs. For routes that are vertical, I use just regular climbing boots.

Dry tooling, just like regular rock climbing, can be dangerous. Since you’re using sharp tools to carve into the rock, you’re exposing the interior of the rock to erosion.

This might not sound that bad, but with enough people dry tooling, is enough to weaken the rock face or break away a critical holding point. 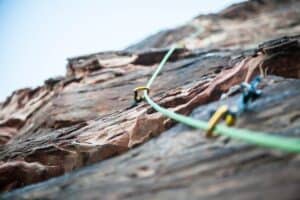 So before you go out, check to see if there are any routes in your area that are tailored for dry tooling, and not your normal rock climbing route.

Many rock climbers also hate to see their beloved routes covered in scars from dry tooling, and worse yet you could drastically change the face of the route and make it inaccessible for rock climbing!

So be smart, and plan ahead. If you have to use an indoor venue, select that over possibly damaging a rock surface and making it inaccessible for future fellow climbers.

The question remains, why do this when you can just rock climb? Well, the answer is more personal than anything.

Dry tooling is popular among ice climbers who are training during the off-season or when they’re unable to access a snowy mountain. That makes sense, but what about everyone else who dry tools? Is there an added benefit?

No. People who dry tool simply like to do just that, plain and simple. It requires a different skillset, and is still a great workout if you’re willing to try, but only you can decide if it’s worth it or not.

Maybe you like the idea of using the axes, or maybe they’re just too expensive compared to rock climbing gear. Maybe you like the feel of bare stone in your hands, and maybe you want to be assisted with tools.

Whatever the case, dry tooling is a personal choice. Rock climbing is a sport, after all, so you need to find the branch that’s right for you!

How To Not Stab Yourself

Let’s talk about the axes and crampons one last time. As you can imagine, they’re quite sharp. So how do you not stab yourself by accident when using them?

Well, it’s actually pretty simple. The axes are designed to come down at a ninety-degree angle, and since they’re opposite of one another, catching yourself in the other arm isn’t common.

What is more common is the crampon catching the back of your leg by mistake. Hence why I only recommend them for use in overhangs. This isn’t to say accidents don’t happen, because they do, but it’s surprisingly hard to get yourself stabbed with dry tooling.

Dry tooling is a different, but still enjoyable, sport. While it might not be for everyone, it can certainly spruce up your next climb so long as you’re using a route that’s specific for dry tooling. Likewise, if you ever want to scale icy mountains, it can’t hurt to train yourself with this type of climbing!