Anyone who’s ever attempted rock climbing – whether as a novice or an expert – knows how physically demanding a pursuit it is. In fact, depending on the amount you do at any one time, there’s a good chance that by the time you complete your climb, your entire body will be feeling some ache, pain, or exhaustion.

Is rock climbing a good way to build muscle? This article will give a detailed examination of this question, focusing on how rock climbing affects different areas of the body, and whether it is an effective way of getting ripped.

Does rock climbing build muscle? Rock climbing is a pursuit that requires physical exertion in most parts of the body. Because of this, it’s a great way to build muscle, particularly in areas of the body such as your core, arms, back, and forearms. However, because rock climbing offers both a strength-training and cardio workout, you are unlikely to bulk up too much.

Why Do The Best Rock Climbers Look So Lean?

While it’s true that rock climbing builds muscle, for reasons I’ll go into depth about shortly, it can seem at odds with the physiques of many of the most successful climbers whose muscle mass doesn’t seem dense at all. But what are the reasons for that?

When you begin rock climbing – mainly if you do it two or three times throughout the week, your body will start responding to the physical challenge by building muscle.

However, once that initial growth of muscle mass is finished, after three months or so, it’s likely to stall because to build too much muscle would be counterproductive to the job at hand. 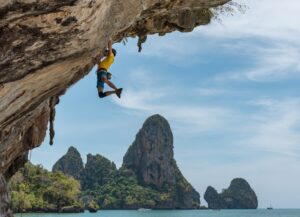 A necessary factor in successful rock climbing is to be lean, as the more weight you’re carrying – in either muscle or fat – the harder it will be to climb.

The key is finding a balance between muscle tone and the weight you’re carrying. Thankfully, this should happen naturally in rock climbing as it combines strength building with cardio to ensure you both bulk up enough and become trimmer.

So, if you do rock climbing regularly, you will build muscle, but you’re not going to end up as ripped as a weightlifter, and that’s a good thing because if you did, the rock climbing itself would become harder.

However, there is a caveat: if you tend to favor bouldering over straight rock climbing, you’re likely to bulk up a little more over time, as that demands you use fast-twitch muscle fibers as the challenge tends to be quicker, but more intense.

Another area the best rock climbers are dedicated to is their nutrition. It sounds obvious because it is, but a balanced diet of foods high in protein, carbs, and fiber is vital. Meanwhile, avoiding too much junk food will also enable you to develop the optimum physique for rock climbing.

If you want to know how many calories rock climbing burns, I have an article on that right here.

Let’s take a closer look at how rock climbing affects the body. (Watch the home workout video at the end)

Not only will this improved grip and forearm strength occur naturally the more rock climbing you do, but it is also the single most crucial thing for enhanced performance.

Your forearm flexors are the main arm muscles used in rock climbing, as you need these to place your hands around objects as you climb. Your biceps will also get a workout from rock climbing as you’ll be relying on them when you’re hanging onto a wall.

Elsewhere on your upper body, back muscles will be in for a particularly rigorous workout whenever you rock climb. One of your larger muscles on the side of your back (latissimus dorsi) is used to pull your body from one handhold to another.

Beyond that, in your upper body, it’s your shoulder muscles that will see the most benefit from rock climbing. Specifically, these are the anterior deltoid, which will pull your upper arm back to enable big reaches, while your rhomboids will allow you to keep your torso near to the rock face.

Whenever you have to keep your body steady on the rock and keep your center of gravity under control, it’s the abdominals in your core that are getting to work. Without this, your pelvis would not align with your chest, which is essential, especially on particularly steep climbs.

Meanwhile, if you’re on an overhanging route, a strong core helps take the strain off your biceps, back, and forearms, which will increase your endurance.

When you begin rock climbing, you’re likely to rely heavily on your upper body while you hone your technique. However, the more experienced you get, the more your lower-body muscles will come into the equation.

Specifically, the quadriceps in your thighs are used for straightening your lower legs as you climb. Meanwhile, your two calf muscles, the soleus, and gastrocnemius, will get plenty of use each time you need to stand on your toes when reaching.

Are Muscle Imbalances An Issue?

If you tend to focus solely on rock climbing for exercise, there’s a good chance that specific muscles will become overdeveloped. Similarly, novice climbers are likely to suffer muscle imbalances as they naturally start off using specific muscles (typically in the upper body) more than others.

Your upper back muscles are particularly susceptible to this problem. As I mentioned earlier, becoming too bulked up will make you a less efficient rock climber, which can be an issue for performance. It can also lead to injury if this happens while your opposing muscles remain weaker.

Thankfully, there are some simple ways to address this problem or, even better, stop it from happening in the first place…

Here are a few techniques you can do quickly and efficiently to correct imbalances:

Check out this video for more rock climbing workouts you can do at home to rebalance and rebuild your body:

This article has gone into depth in answering the question of whether rock climbing builds muscle. The answer is that it does… but it’s more complicated than that.

If you’re a novice rock-climber, the chances are you’ll bulk up most of all in the first three months or so. However, this is a good thing as building too much muscle will harm your performance.

Thankfully, because rock climbing involves strength building and cardio exercises, rather than bulking, the more you climb, the more your body will become leaner and only as muscular as you need to perform.

Because of injuries or flaws in techniques, as well as focusing solely on rock climbing as your form of exercise, you might run the risk of developing muscle imbalances. Thankfully, there are some simple ways you can address most of these issues as your experience grows.

It can be puzzling that the most successful rock climbers tend to have lean physiques rather than bulked-up. Indeed, it can also be easy to assume that as rock climbing involves a great deal of physical exertion, the more ripped you are, the better your performance will be.

However, the truth is that being too bulked up will harm your rock climbing performance.

So, if you’re struggling in the beginning stages of rock climbing, or wondering why your body’s muscle mass has stalled after the first few months, don’t immediately reach for the protein shakes and a dash to the gym.

Your body is naturally adjusting to life as a rock climber. Let it concentrate on that while you concern yourself with getting up that cliff face!