Sometimes, when you’re fishing, you don’t want to acquire lots of expensive equipment, nor do you want to travel for miles to find the perfect spot.

You just want to… fish. Crappie is some of the most popular game fish because they offer a chance to do just that.

Crappie fishing is favored among many anglers, and for good reason. In this ultimate guide, I’ll talk in-depth about the best places to go fishing for crappie, which equipment and bait are the best, and the ideal level of experience you need to catch this type of fish.

What Is A Crappie?

Crappie is a type of game fish that belongs to the sunfish family and is also a relative of bass. They are relatively small, too, only reaching around 10 inches in length when fully grown. 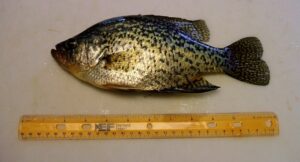 As its name suggests, white crappie is paler than black crappie. Also, the black crappie has a dark, mottled pattern on a silvery gray-white body. Meanwhile, the white crappie’s spots tend to be less irregular and are formed in vertical lines.

The shape of the white crappie is slightly different, too – they’re a tad more elongated than black crappie. However, their overall size and weight are around the same.

The most reliable way to distinguish the two is by counting the spines on their dorsal fins. As well as being slightly further back on its body, the white crappie has 5 or 6 spines on its dorsal fin, while the black crappie has 7 or 8 (the big show-off!).

The big question is, does it actually matter which type of crappie you catch? Absolutely not! For most anglers, either is fine.

Where and When Should I Fish For Crappie?

The short answer to this particular question is that crappie is some of the most common fish in the USA and Canada and can be found in ponds, lakes, and streams.

Not only that, but they can be fished at any time of year, making them a reliable and regular catch for any angler.

Having said that, there are still subtle ways you can maximize your chances of catching crappie. From the time of day you fish to whereabouts in the body of water, you’re most likely to find them.

I’ll come to those answers further on in the article.

Why Is Crappie Fishing So Popular?

There are many reasons these are such a perennially popular fish for angling.

The first thing, as I touched on in the previous point, is their sheer prevalence. If you don’t fancy a 2 – 3 hour drive to a particular lake, pond, or stream and just want to get down to some angling quickly, crappie fishing is one of your best options.

Almost every pond, lake, and stream will have crappie in abundance, making it an excellent choice for getting going quickly or giving a straightforward and rewarding lesson to children or other inexperienced anglers.

What these fish lack in size, they more than make up for in sheer volume. This means you don’t need to worry about small numbers pricking your conscience as you fish – crappie are among the most common fish you’ll come across, so you can fish to your heart’s content knowing that when you’re done, there will be more – many, many more – to keep the numbers healthy. 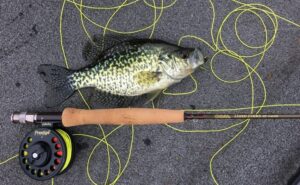 Partly because of the huge numbers, they’re also renowned for being easy to catch. Not only that, but crappie are hardly the most fearsome battlers when they’re on your line either.

They’re so lightweight – you’re unlikely to catch one heavier than a pound in weight – that you might struggle even to notice you have a catch. Meanwhile, reeling one in isn’t usually a huge job either, as they don’t tend to offer too much resistance.

Neither will you need lots of fancy equipment to go crappie fishing. I’ll go into greater detail about the best equipment for crappie fishing shortly, but suffice to say, you can get away with the most rudimentary equipment while fishing and still expect to make a decent catch.

Finally, crappie is great to eat. They have delicate, white, and flaky flesh that tastes pleasant on its own or as part of various dishes. So, as far as tasty, abundant, and versatile protein sources go, they don’t come much better than crappie.

This potent combination of qualities makes them perfect for anglers of any experience. However, there are still several important things you need to consider to ensure the best chance of a productive day (or night) fishing for crappie.

As I mentioned earlier, because crappie is so easy to catch, expensive equipment isn’t necessary. Having said that, some items are better suited to fishing for crappie than others. Let’s take a look at some of them:

Spinners are excellent lures for these fish but opt for the smaller ones for the best results. I’ve had good results from this one.

Where it comes to live bait, crappie isn’t particularly fussy. You don’t need to worry about a particular color, and most things’ll tempt them. Minnows make for particularly effective live bait, but worms and insects will do the job too.

A jig with a feathery tail and furry body is excellent for enticing crappie hiding in weeds and reeds. This one, available from Bass Pro, will do the job nicely.

A jig of between 1/16 oz to 1/8 is the best size to use, while white and pink ones are the most effective. Also, use a loop knot on your jig as this will ensure the jig dangles correctly and freely, making them irresistible for crappie.

Plastic, wood, or pencil floats are good options for fishing crappie, although most anglers tend to opt for the latter two.

Again, the type of line you use shouldn’t change the result too much. However, if you’re fishing in shallower water, a mono line will be ideal. It is good practice to ensure your line is tight during crappie fishing because if it’s not tight enough, they can shake themselves from the hook.

Smaller, lightweight reels made from graphite or aluminum are your best option when crappie fishing. Choose baitcasting or spinning reels (both on Amazon) for the best results. Keep in mind, though, that there’s a steeper learning curve with baitcaster reels.

Choose a lightweight graphite or graphite composite rod such as this one from B’n’M while fishing for crappie. Graphite rods are not quite as hard-wearing as fiberglass. However, you are very unlikely to catch crappie heavier than around 1lb, so the chances of breaking your rod while crappie fishing are slim.

Depending on the season (and whether it is the pre or post-spawn period), crappie will have subtly different habits that it’s worth being aware of when fishing for them.

During pre-spawn springtime, crappie will seek out shallower waters and head towards the banks of a river or a shoreline.

During the post-spawn seasons of summer and fall, crappie will often be found near structures such as fallen trees, bushes, jetties, and piers.

This is the period they’re likely to be at their most elusive, so a little more patience than other times of the year might be required. There will still be lots of crappie hidden in these areas, though, so you should still usually have a productive session.

During winter, when the temperature drops, they tend to stay in water 15ft deep or more. Again, you’re likely to find them hiding near whatever structures are in the body of water you’re fishing, so concentrate on those areas. At this time of year, crappie doesn’t move an awful lot, so a slow and steady approach is your best bet.

Of course, with each season come temperature changes, which can affect the habits of crappie.

When the temperature is around freezing, crappie will tend to stay at the bottom for cover. However, when it warms up to above 50F, crappie becomes more active and starts moving to a greater variety of depths.

A temperature of around 55F is often a sweet spot for catching crappie, as this is when they start feeding a lot before they spawn. When temperatures reach around 90F, you’ll find crappie in shallower areas away from their usual hiding places.

Regardless of the time of year, the best times to go crappie fishing are early in the morning or evening. That’s because crappie tends to feed most between around midnight and 2 am, as well as dawn and dusk.

As you’ll have gathered by now, some techniques generally work better than others when fishing for crappie, but there are barely any flat-out wrong ways to go about it.

However, that doesn’t mean there aren’t some tricks you can apply to give yourself the best possible chance of a catch. Here are some of the best:

The common theme running through each of these techniques that speed (or lack of) is everything. When you’re crappie fishing, it’s far better to reel in slowly and letting the jig float than constantly reeling in quickly and moving your rod around.

You’re trying to get the crappie to notice the bait, and the best way to do that – generally – is to let it stay in one place for a while until you get a bite.

From the information I have provided in the article, it is almost impossible to escape the conclusion that for anglers of any experience, crappie is one of the most fun, rewarding, hassle-free, and easy fish to catch.

There’s no need to buy lots of expensive equipment, they thrive – in abundance – in hundreds of thousands of bodies of freshwater throughout the USA and Canada, and they taste great too.

Not only that, but you can fish for crappie at any time of the year, while the type of crappie you catch – black or white – is pretty unimportant too.

Having said that, there are still a number of things worth considering – from the type of line you use to the best times to go crappie fishing – for the best possible results, and this article has gone over some of the most important things to look out for.

If anything, the biggest drawback with these fish is that it might not offer enough of a challenge to the more experienced anglers – and nor will the size of your catch be entering any record books when fishing for crappie.

However, for most people, crappie fishing offers a fun, inexpensive, and stress-free way of making a catch – and for the less experienced (and less competitive) anglers, that’s surely about as good as it gets.