Carp and catfish share several similarities. Some are more obvious, while others are so subtle that only experienced anglers can tell.

The main difference between the two is in their appearance. Carp have large scales, whereas catfish have whiskers (aka barbels) near their mouth. However, there is more to it than this.

So, when analyzing carp vs catfish, what are the differences? This article will break them down, from their appearance to their habitats, and how they react on the hook, to how they differ in taste.

First, let’s take a look at their similarities. They both:

Perhaps the most obvious difference is in their appearances, the most prominent being the presence of barbels (whisker-like sensory organs) you’ll find near the mouths of catfish. 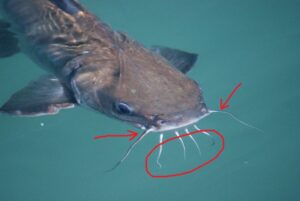 These barbels are handy for catfish when hunting for prey, as they give them a stronger sense of smell than carp. However, this also makes them more likely to detect and take your bait.

On the other hand, catfish don’t have any scales at all and instead have slimy, thick flesh with a different color depending on its breed.

Habitats of Carp and Catfish

When is a similarity not a similarity? When you recognize the nuances of the habitats of carp and catfish. While it’s true that they both live in lakes and rivers, you’ll generally find each in different parts of them.

Carp prefer to stay in moving waters, traveling around rivers in schools of five or six. Catfish, meanwhile, remain beneath the currents waiting for their prey to come along on the current.

Carp vs Catfish: Is There a Catch?

Carp are more challenging to catch than catfish, as they’re more elusive and less likely to take your bait. However, that’s not the only difference when it comes to catching them.

When you catch a carp, you may have noticed that it will immediately swim off in a frenzy, trying to escape. Not only that, but it’ll use its powerful tail to put up a fight, even threatening to snap the line.

It’ll probably stay close to the surface, too, even coming above the water at various points.

Catfish react differently. Like carp, they’ll make a dash for it, but they tend to head straight for deeper waters, where they’ll stay there, twisting and turning and making life as difficult as they can for you.

Some anglers have also reported that catfish can give their head a subtle shake while on the line in an attempt to get free. 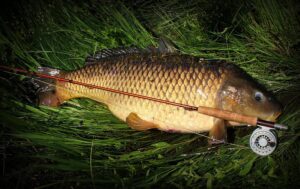 A Question of Taste

One of the significant differences you should know about is their taste if you’re hoping to catch carp or catfish to eat.

Some people say you shouldn’t eat carp, pointing to their tough texture (particularly among bigger ones) and decidedly ‘muddy’ taste.

However, others insist that to transform carp into a meal similar to salmon – oily, mild-tasting, and with flaky flesh – you just need to place it on ice as soon as you catch it.

Catfish have an altogether more, um, palatable reputation as a delicacy, as they’re known for having a sweet and mild taste regardless.

Generally speaking, if you’re wondering whether to fish catfish or carp to eat and you’re unsure which will make for the tastiest meal, bear in mind that you’re more likely to find catfish on the menu in a decent restaurant than carp. There’s probably a good reason for that.

In this article, I have detailed some of the most significant differences between carp and catfish. As I have explained, despite their similarities, there are several differences that you should take into account before deciding which one to fish.

Overall, catfish are likely to offer beginners the best practice, as they’re more likely to smell your bait and aren’t quite as elusive as carp. For more advanced anglers, carp offer the biggest challenge.

Whether you catch a carp or a catfish, though, there is one significant similarity between the two – they’re sure to put up an enormous fight, just in decidedly different ways!