Picture the scene: the campfire you’ve been looking forward to all day is crackling away beautifully, the S’mores are ready to be toasted, you’re in the company of some of your very favorite people and the night sky is clear.

You stoke the fire, settle back, take a satisfying breath and… the smoke from the campfire comes straight towards you, just like it always does.

If this scenario is one you’re all too familiar with, read on, as I’m going to explain exactly why campfire smoke follows you and the measures you can take to prevent it happening.

OK, let’s cut to the chase, just why does campfire smoke follow you? The main reason is due to the wind and the frequency with which it changes direction, Other factors are at play too, including your movements around the fire, but fundamentally it comes down to the wind. But how, exactly? Let’s explore further. 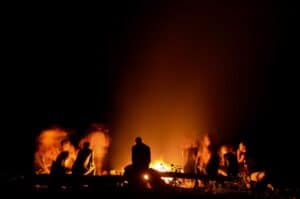 The main reason for this infuriating phenomenon is wind speed combined with how often it changes direction.

Smoke follows the direction of least resistance (in other words, it goes where the wind blows). So, if you’ve set your campfire up in a place where the wind changes direction frequently, you’re more likely to get the feeling that the smoke is following you around.

The answer, of course, is to set up a campfire where the wind direction tends to stay consistent. That way, as long as you don’t sit downwind, the smoke should stay away from you. And if you don’t find a spot like that?

If you’re in a place where the wind is moving from one direction to another and the smoke seems to be heading towards you, your best bet is to take up a new position, away from where it seems to be blowing the most. Simple, eh? Well, not quite.

The problem with moving to another position around the campfire is that the very act of doing this will disrupt the wind flow. Disrupted wind flow will then create a tailwind which, you guessed it, will make the smoke appear to gravitate towards you again, no matter where you place yourself.

But that’s not all. Here comes the (even more) science bit.

It’s Because Of Physics

I know. Chances are you didn’t come here for a complex science lesson. So here is your simple, five-step guide as to what physics has to do with all of this: 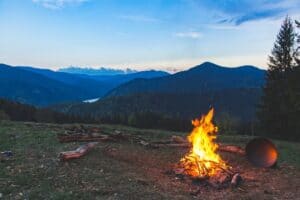 How To Solve The Problem

There are a number of ways you can lessen the chances of campfire smoke following you, and here are some of the most effective.

The issue of why campfire smoke follows you is one that has led to increasingly vexed campfire lovers trying all sorts of things over the years, from manically repeating the words “white rabbit” over and over in the hope of sending it elsewhere, to resigning themselves to their fate with a wistful sigh before declaring that “at least smoke follows beauty”.

Hopefully this article contains enough practical information in it to convince you that there are, in fact, more effective ways of dealing with the issue of why campfire smoke follows you.

Not only that, but you should be able to implement the majority of the suggestions through small changes in your behaviors. Then, all that will be left is for you to enjoy your campfire with that once annoying smoke, finally giving you a wide berth.