Fishing might as well be the king of all sports. Anywhere that fish bite, people have been making a lively hood on their catches as well as showing off their biggest catch.

As any freshwater angler can tell you, the best time to fish on a lake or a river is during the early morning hours, but is this true for saltwater fishing?

And what factors determine the likelihood of you reeling in a whopper as opposed to having to tell your friends a whopper story of how you didn’t catch anything?

So what’s the best time to go saltwater fishing? The best time is either at dawn or dusk. This has to do with the prey pattern. Many bait fish and crustaceans come out to feed at night, starting from the late evening hours and lasting until the morning hours.

When the fun gets too high, these smaller animals will descend into the depths of the ocean to hide from predators. That is, the fish you want to catch. 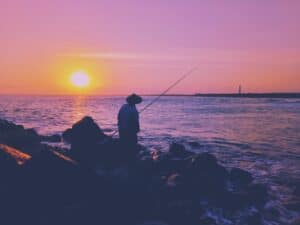 The optimal feeding time is therefore dusk and dawn, where there is just enough sunlight left to make out prey. During the day, all sorts of fish will be actively swimming close to the surface but for the most part, may not be taken in by your bait.

Because visibility is rather low during dusk and dawn, a fish is much more likely to grab onto your line compared to mid-day when they’re more likely to notice something seems fishy with your line. Pardon my pun.

What Month Is The Best Time To Go Fishing?

This very much depends on the fish you’re trying to catch. Migration patterns will play a key part in saltwater fishing, both bait fish and predators.

Some fish are active year-round, and others are active during certain months. Unlike freshwater fish, where the months can affect the fish population such as slowing metabolisms and making them hide at greater depths, the months don’t have much impact on fish in the oceans.

What does have a major impact is the time of the month. As not only will the moon affect the tides, which we’ll go over, but also a full moon tends to make fish much more active.

This is because a full moon provides much more light to both prey species and predators. Fish are going to be more eager to bit during a full moon than one that’s overcast.

When taking the month into consideration, think of it more as which fish is going to be more active during these months compared to others.

Also, take into account the position of the moon during the month if you really want to get the best results from your fishing trip. 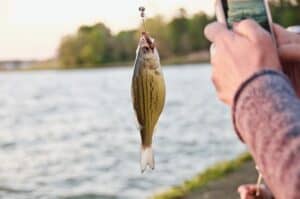 So, if you have a tackle filled with artificial bait, you can rest assured that these items are going to be fine for saltwater fishing.

This being said, you might be more interested in something more “alive”; or at the very least, something that used to be alive.

Bait fish, crustaceans, shrimp, worms, shellfish, and squid are all excellent choices for saltwater fishing. If you don’t like the idea of them still being alive, you can always buy frozen bait.

Due to their smell, and also wiggling if still alive, bait fish and other bait animals are perfect for attracting and hooking saltwater fish.

Since insects normally don’t make up a large portion of a saltwater fish’s diet, unless they’re close to shore or in an estuary, bait animals provide a more natural and attractive bait source than artificial bait based around the look of insects.

Of course, exceptions exist such as marine worms or fishing near estuaries and on shorelines. It’s best to do some research on the diet of the fish you want to catch to match your bait as close as you can.

Alternatively, shrimp and smaller bait fish make perfect all-rounder baits for just about any sort of fish out in the open oceans. 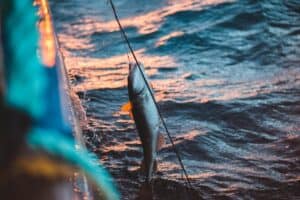 Do Saltwater Fish Bite After Rain?

Yes, but it doesn’t play that much importance compared to freshwater fish. While most surface-dwelling fish will certainly benefit from the rains, for fish you actually want to catch it doesn’t matter.

Instead, what matters is if a front is coming through. Regardless if a cold front or a warm front, the barometric pressure will start to drop and there will be a cloud cover.

After the front has passed, and the skies are clear, the fish will need time to readjust to the change and won’t be as hungry. So if you know a front is coming, be sure to fish before the front and not after.

Is The Tide Important?

Let’s talk about one of the most important things to consider when saltwater fishing; the tide. Tides are especially important if your fishing from shore as they can make active areas barren, and barren areas lively with fish.

Depressions can easily trap fish during low tides, while during high tides fish won’t notice or care. Tides also affect the prey animals and fish, pushing and pulling them to shore and then back out to sea.

Where the prey goes, the fish will follow, and this is where currents come into play. The current easily knocks prey and fish alike around.

Being able to read the current allows you to find where the fish are going, and you can even work the current to your advantage by tiring a fish out if you’re pulling them against the current.

This can also tire you out, so caution should be advised if you want to try this!

Saltwater fishing is more complex than freshwater fishing, as there are more variables to take into account. This doesn’t mean it’s hard, quite the contrary.

Once you know the key points such as the tides, the seasons, migration patterns, and preferred bait, saltwater fishing is a rewarding sport and you can land some fantastic catches with just a little patience and some luck.